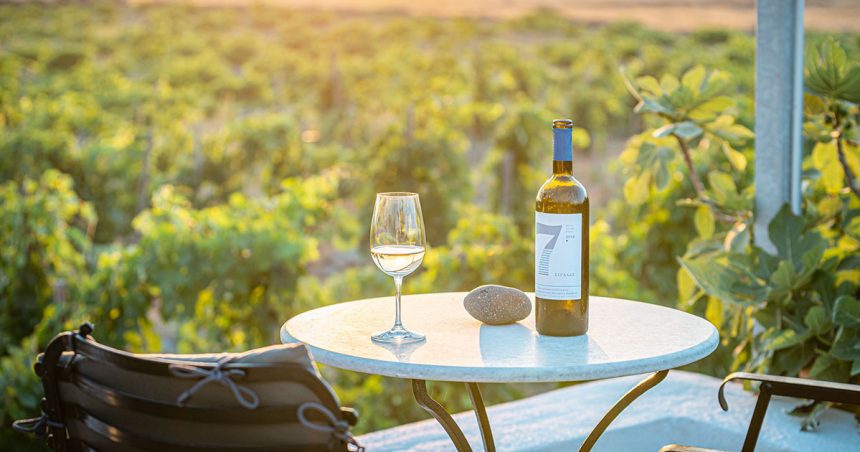 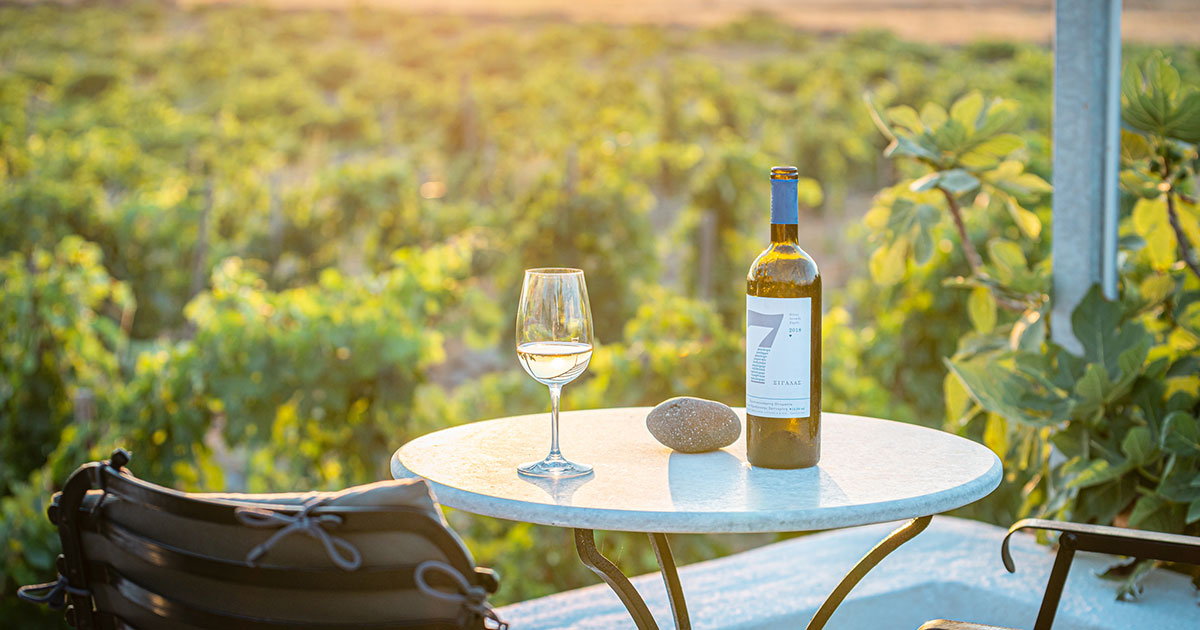 One region that has been in the spotlight is Santorini. One of the Cyclades islands located in the Aegean Sea, Santorini has become a must-see area — the whitewashed homes are the stuff of Instagram dreams, and the sea views are truly incomparable.

As it turns, out, they also produced some pretty fantastic wine.

Santorini has a Volcanic Terroir which means that the vineyards in Santorini are made up of volcanic ash, lava rock, and pomace. “This super sandy, volcanic soil is unlike many places in the world, creating wines with a highly developed minerality and complexity,” adds Livanos. 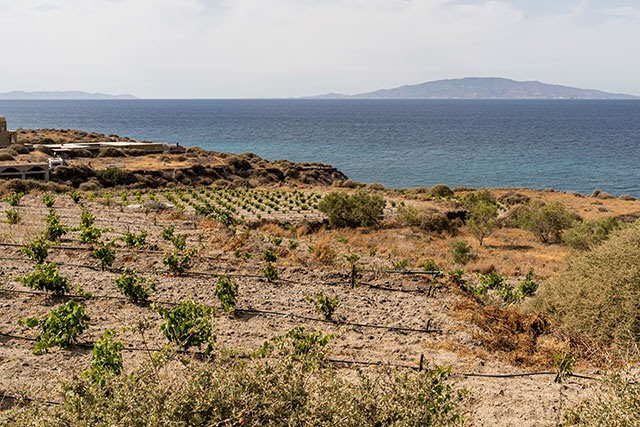 Geologically, the island is all that remains of an ancient volcanic cone, whose eruption created the cliffs and lagoon around which the Santorini tourist trade thrives. Although it also produces red wines from Mandilaria and Mavrotragano, the island is best known for its crisp, dry whites and sweet vinsanto, both of which are based on the island’s flagship grape variety, Assyrtiko. The minimal rainfall adds to the resilience of the wines, which grow in some of the harshest conditions.

“Because of the sandy soil on Santorini, the vines are virtually immune to phylloxera, a parasitic louse that decimated the wine world in the rest of Europe.” Says Livanos. “As a result, you have some of the oldest vines on earth growing on Santorini, grown on original, ungrafted rootsock. This creates wines with depth and complexity. This also leads to extremely low yields.”

Kamal Kouiri, Director of Operations, Wine Director, and General Manager at Molyvos restaurant in NYC explains that “typical Mediterranean with ample sunshine through the year, long dry summers, relatively short and mild winter and brief spring. The vines sustain themselves on only the mist and morning dew as the rocky, volcanic soil causes all moisture and rainfall to drain.”

For Stellios Boutaris, a 5th generation wine maker whose family has been in the business since 1879, the key to the wine in Santorini is all about the roots.

‘Santorini is a unique region, and uses a special pruning method ,” says Boutaris, the owner of Sigalas and Kir-Yanni wineries. “The vines are pruned into a basket-style which puts the grapes into the “basket” to protect from wind and sun. After 30, 40, 50, 60 years, the basket is cut but roots are the same – they can be 1000 years old. There are some really deep roots in Santorini.”

The method of winemaking in Santorini is different from other regions in that the whole skin and whole bunch is pressed, says Boutaris. “It’s a nice long press which avoids oxidation.” 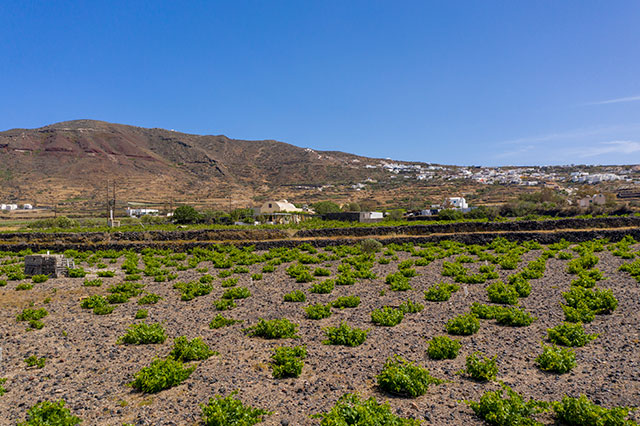 Production of wine on Santorini dates back to around 1653 BC when a volcanic eruption buried the prehistoric city of Akrotiri. Excavations of the city have revealed various indications of vine-growing and winemaking on the island including grape seeds scattered amongst the ruins. Three centuries later the island was resettled, and vines were replanted due to their ability to thrive in the challenging growing conditions found on the island. These were able to survive the Phylloxera pandemic of the late 19th Century thanks to the soil of Santorini. A high sand content combined with little organic material and clay made it impossible for the louse to survive here.

“Wine has always been a big part of Greek Culture,” says Boutaris. “It’s all about having fun and enjoying life — there is even a god of wine!”

Refreshing, crisp and aromatic, Santorini’s dry whites are arguably the island’s most promising modern-day wine style. These wines are made predominantly from Assyrtiko, with a little Athiri and Aidani; oak-aged examples are a little more complex, bringing a hint of nuttiness and spice from their time in barrel.

The most complex of Santorini’s dry white styles is the Nykteri, made from overripe grapes given skin contact during the early stages of fermentation, and then barrel aged for between three and ten months. They are named for the Greek term for ‘working all night’, as grapes were traditionally harvested at night to avoid the complications that arose from the day’s heat. Nykteri wines are noticeably richer than standard Santorini white wines and offer a certain whiff of exotic fruit and honeysuckle. 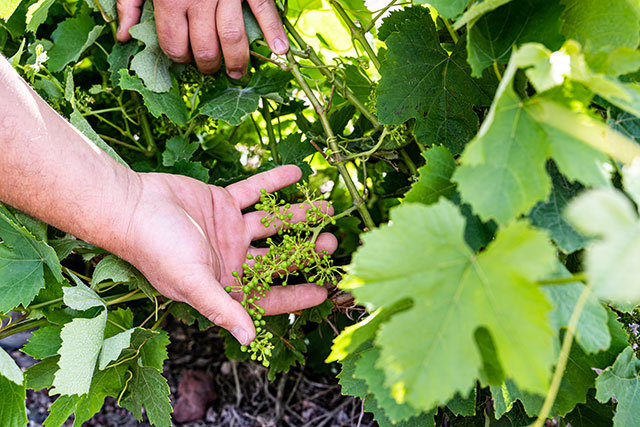 Red wines take a back seat on Santorini, even though dark-skinned varieties account for around 20 percent of the island’s total vineyard area. Santorini’s red wines are typically deep crimson in color, with soft tannins and fruit-forward flavors. There is often something a little smoky, over-ripe and “Amarone” about them.

Sweet Vinsanto is perhaps Santorini’s most unique contribution to the wine world. This rich dessert wine combines acidity and intense sweetness with aromas of dried citrus peel, figs, apricots and sticky toffee pudding. The name Vinsanto can be traced back to the 16th Century, when wine was exported from the island in barrels branded as wine (vin) from Santorini (Santo). Although often mis-translated as “Holy Wine”, it is quite distinct from Italian “Vin Santo”. In 2002, the European Union granted Santorini exclusive rights to the name “Vinsanto”, although Italy may still use “vin Santo.”

Santorini Vinsanto wines are still produced in the traditional method. In line with the designation of origin laws, the wines are at least 50 percent Assyrtiko, with smaller percentages of Athiri and Aidani. After harvest, grapes are left to air-dry in the sun for one to two weeks, before undergoing a long and slow fermentation. They are then barrel-aged for several years, and the wine will typically take on darker, amber colors. Another variation, Mezzo, is less sweet than Vinsanto and has not achieved appellation status.

Vineyards — like the venerable Domaine Siglas — and wine form an important, traditional part of culture on the island (whose official name is actually Thira) but is increasingly threatened by the island’s ever-expanding tourism industry. The profitability of Santorini hotels, restaurants and night clubs has forced land prices up significantly in recent decades, making winegrowing a less-attractive commercial prospect.

Another point of interest with wines of this region: Santorini is a Protected Designation of Origin (PDO), where to put Santorini on the label it needs to be at least 75% Assyritko, with the other 25% allowed to be aithiri and aidani.

“In Aegean and specifically in Santorini where Assyrtiko is from, the variety has shown it can be cultivated in different climates and soils,” says Molyvos’s Kouiri. “And while some regions give better characteristics than others, it’s difficult to find a sub-par Assyrtiko. The wines are robust, and powerful with ton of minerals never less can work wonder with Food like Grilled Whole Black Sea bass, or Roasted Lamb. Its flagship for the white wines of Greece.” 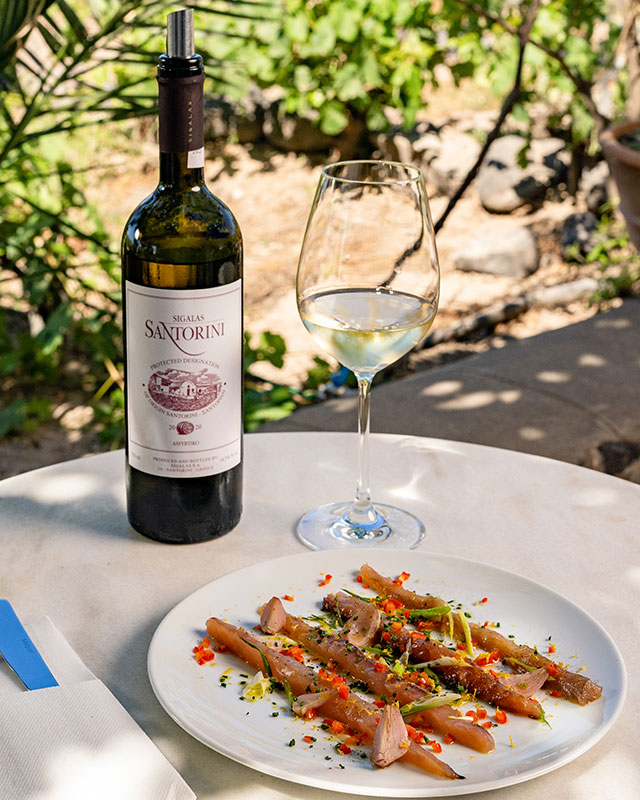 There is no doubt that Assrytiko has captured the market of Greek wines.

“Assyrtiko is seemingly the most well-known indigenous grape our guests are familiar with,” says Amy Racine, Beverage Director for JF Restaurants. “Many of our guest come in totally open to trying new wine, but also let us know they have had bad experiences with Greek wine in the past. It seems Greece as a wine region and USA imports of Greek wine in going through a renaissance and starting over. Guests love it!”

Kouiri concurs, adding, “Over the last 6-8 years, Greek wine has reached the next level of excellence. You have this new generation of winemakers that came from a family of growers, and they studied In other parts of the world to learn new techniques and practices. They have then come back to their family land, and applied this newfound style to their small, family vineyards. They’ve learned winemaking all over the world, not just Bordeaux and Dijon, so you’re seeing a unique range being applied on different terroir and varietals.”

“During my 21 years running the wine program at Molyvos in New York City, I have seen this growth and development in Greek wine take place little by little,” Kouiri continues. “I go to Greece twice a year and see how the passion in the wineries is growing. We have developed the largest all Greek wine list in the country, and we love showing our guests just how fantastic Greek wine can be. The challenge of only serving Greek wine is now our biggest strength, as we are able to transport our customers to the country we love so much.”

Wines from Santorini — and other Greek regions — can be ordered by visiting shop.diamondwineimporters.com. 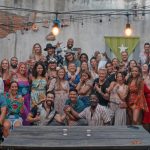 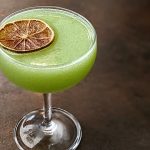 Drink This Now: Campesino Cocktail at A.O.C. by Ignacio Murillo
Leave a comment 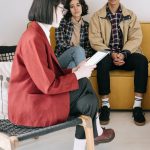 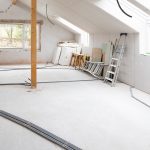 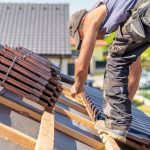 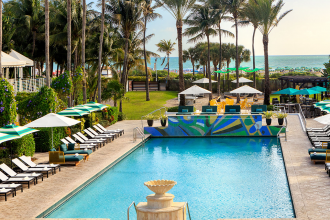 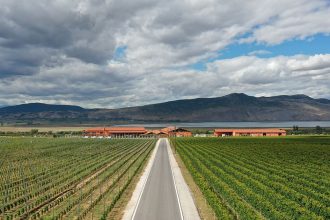 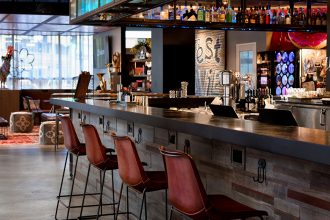